The Mississaugas of Scugog Island First Nation moved into southern Ontario from their former homeland north of Lake Huron around the year 1700. The Mississaugas are a branch of the greater Ojibwa Nation, one of the largest native groups in Canada. From time immemorial, Mississauga people secured all their needs from the surrounding environment (“Mother Earth”); hunting and fishing and harvesting plant materials for food and medicines. Wild rice, an important food staple, grows in shallow water and was gathered in late summer using birch bark canoes.

Mississauga people lived traditionally in single-family dome shaped or conical birch bark wigwams.The word tipi, popularized in modern entertainment media, is actually the word for “house” from an unrelated First Nation language spoken out on the western prairies, and it has no application to Mississauga wigwams per se. 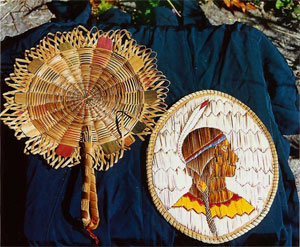 The move into southern Ontario followed the 17th century dispersal of the Wendat people or, “Hurons” as the French named them. These once numerous people together with their close relatives, the Petun and Neutrals, were first ravaged by European diseases and then around 1650 were attacked in their villages by another native group from south of Lake Ontario.

The first Mississauga people to settle in the basin of Lake Scugog around 1700 appreciated the bountiful resources available in the virgin forests and unspoiled wetlands. Game and fur animals, waterfowl and fish abounded, and wild rice grew in profusion in the shallow waters. The people flourished in this paradise for nearly a century until the British arrived with their insatiable appetite for aboriginal land. Having just lost the American War of Independence, British refugees came flooding north into Upper Canada seeking new land.

Government officials were soon conducting land acquisition treaties with Mississauga and Ojibwa people who neither understood the language of these powerful strangers nor fully grasped the revolutionary concept of permanently selling their Mother Earth. Millions of acres of valuable native lands were given up through these treaties with very little received in return. Unfortunately, fair dealings were not the order of the day. In one instance, a 100 mile (160 kilometer) stretch of land about 20 kilometers wide along Lake Ontario from roughly Trenton to Toronto was ceded, but the treaty was so flawed, government officials later privately agreed that it was invalid. Mississauga people however were not so informed, and that land was quickly taken up by non-native settlers.

In another case, the land on the west side of Lake Scugog, all the way north to Lake Simcoe was not negotiated or treatied for with the resident Mississauga people, at all. They were simply ignored and swept aside and the land was given out to non-native settlers who chopped down forests to make their farms.

By 1830, with strangers despoiling their hunting lands and with rising water from a new dam on the Scugog River at Lindsay flooding their rice beds, the Mississauga people moved away at the government’s insistence. Some went to Lake Simcoe and onto the new reserve at Coldwater, and some moved to live with their friends at Chemong Lake (also called Mud Lake). Scugog Chief Jacob Crane went with the group to Mud Lake.

In 1836, Chief Crane and his people moved farther west to reserve land at Balsam Lake. But by 1843, with non-native settlement increasing and game populations declining, the government was encouraging native people to take up subsistence farming to supply their food needs. Owing to the unproductive rocky soil at Balsam Lake, Chief Crane’s people sought better land, and they chose to move back to Scugog.

With increasing settlement at Scugog, the only land available was an 800 acre (320 hectare) landlocked parcel on Scugog Island. And despite the thousands of acres west of Lake Scugog earlier taken from them, Mississauga people were required to purchase these 800 acres with their own money.

In 1844 Chief Crane and his people returned home to Scugog, although it was no longer the paradise it had once been. Chief Crane died at Scugog in 1861.

Over the century and a half that followed, the people tried subsistence farming, but this didn’t prove viable; fur trapping, hunting and basket-making supplied a meager income. Later, off-reserve jobs in the cities to the south were resorted to, but times were never bountiful. In spite of heavy enlistment for the great wars, and the recent history of Residential Schools, the “60’s Scoop,” and a dwindling member population, the Mississauga people survived and rebuilt their community. After much forward-thinking and hard work, the Mississaugas opened their community economic development project in 1997, the Great Blue Heron Charity Casino. With the advent of the casino also came the Baagwating Community Association; Baagwating is run by members of the Mississaugas of Scugog Island First Nation and is the charitable-arm of the Great Blue Heron. Through building community networks, the Mississaugas of Scugog Island First Nation have built relationships of trust and respect with the Scugog Township, the Durham Region, and the local townspeople.

Lake Studies have shown that wild rice must have been introduced into Lake Scugog by First Nations people as early as 1200.  This is the first known chronological point showing evidence of aboriginal use of the area.

In later years it is known that Lake Scugog was an important portage route from the northern Kawartha Lakes down to Oshawa Creek and Lake Ontario for First Nations travellers.